Tsunamis are most often caused by huge undersea earthquakes which cause large waves. It may take hours for waves to reach the shore if an earthquake happens far away. Strong earthquakes near land could generate a tsunami that arrives in just minutes.

If you feel an earthquake, and you're at the coast in an area without evacuation maps, plans or cell service, immediately move to at least 20 metres above sea level. If you live in an at-risk community with evacuation plans, you should:

Tsunami notification zones
Parksville Qualicum Beach region is fortunate to be on the sheltered east coast of Vancouver Island which is Tsunami Notification Zone E. Our region is identified as low risk for tsunami with wave height anticipated to be less than 2 metres above normal sea levels.

British Columbia’s coastal communities are divided into five tsunami notification zones. Each of the five zones are identified below and the map is available here. 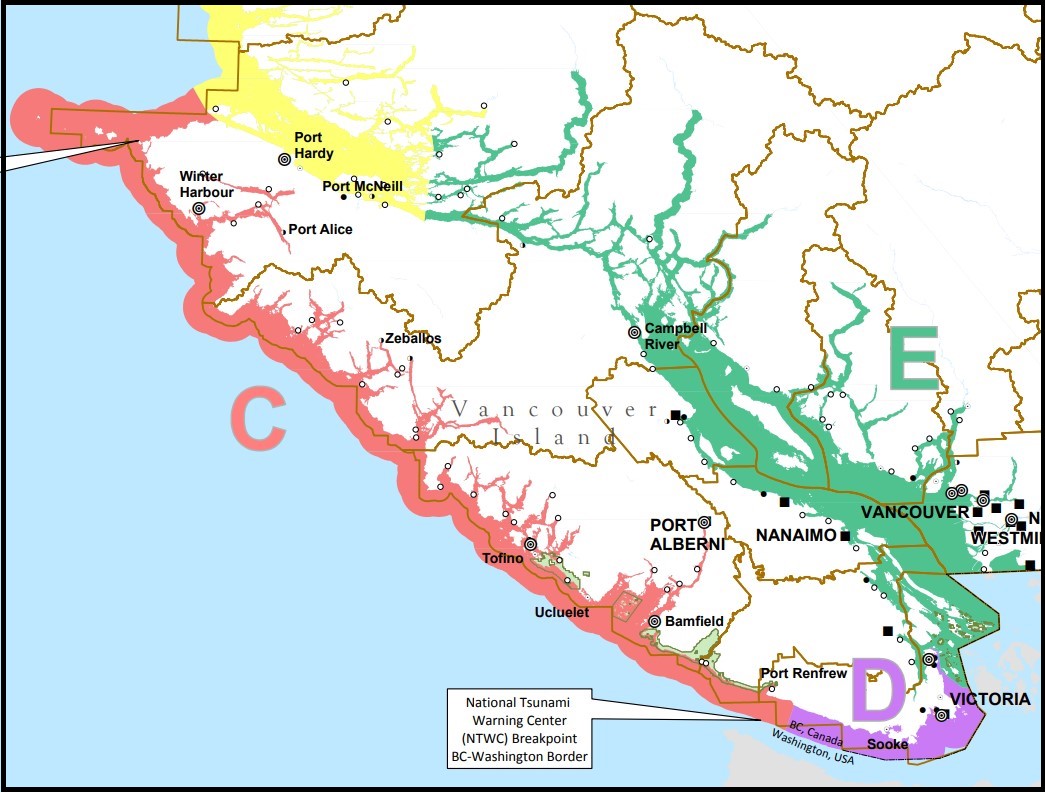 How to get information
Should a tsunami warning be issued for Notification Zone E, the warning will be broadcast across multiple channels - television, radio, mobile devices, etc. Emergency Management Oceanside will issue an alert through Voyent Alert!. Voyent Alert! is a multi-purpose communication service used to send alerts to residents, businesses and visitors during critical events such as floods, wildfires or other emergencies in the region.

Emergency Management BC has a Tsunami Warning and Alerting Plan in place and will convey warnings to our coastal communities as quickly as possible. BC Tsunami Preparedness and Response details can be found here. For more information on Emergency Management Alerts, please refer to this link or follow Emergency Info BC on Twitter.

When a tsunami warning has been issued, it is important to follow directions from local authorities. You should also follow official sources of information such as Emergency Info BC.

Warning - is the highest level of tsunami alert. Warnings are issued due to the imminent threat of a tsunami from a large undersea earthquake or following confirmation that a potentially destructive tsunami is underway. They may initially be based only on seismic information as a means of providing the earliest possible alert. Warnings advise that appropriate actions be taken in response to the tsunami threat. Such actions could include the evacuation of low-lying coastal areas.

Advisory - is the second highest level of tsunami alert. Advisories are issued due to the threat of a tsunami that has the potential to produce strong currents dangerous to those in or near the water. Significant inundation is not expected for areas under an advisory but coastal zones may be at risk due to strong currents. Appropriate actions by local emergency management personnel may include closing beaches and evacuating harbours and marinas.

Watch - is the third highest level of tsunami alert. Watches are based on seismic information, without confirmation that a destructive tsunami is underway. There is a potential threat to a zone under a tsunami Watch but communities have time to prepare. Emergency management personnel and coastal residents should prepare to take action in case the watch is upgraded.

Cancellation - cancels any previously issued tsunami messages. It is issued when there is no longer observed evidence of tsunami waves at tide gauge stations. Local conditions may differ from those at tide gauge stations and local authorities should determine the safety of coastlines. Once a cancellation has been issued for a tsunami event, Emergency Management BC will no longer issue tsunami messages.


References
Emergency Info BC
Get Prepared BC